Cinescape Magazine is a look at film, tv, comics, video games, and 70's, 80's and 90's nostalgia from the perspective of two normal average joe's that just love movies, in whatever form they come in. 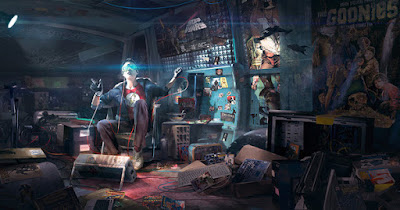 "She wanted to go dancing, so we watched a movie."


As an exaggerated statement on today's society, Ready Player One captures on the fear of how many of us would rather stay in a fantasy world than face the harsher realities of our time; corporations own and control everything, originality and creative thought are exploited to the point of cliche, and people would rather live vicariously through more attractive avatars. If I'm sounding like I'm reviewing a grim tale like George Orwell's 1984, take comfort that this film is nowhere near as bleak as I may have started to make it sound. Despite its futuristic outlook, Ready Player One is a fun return to form for legendary director Steven Spielberg (E.T. The Extra-Terrestrial) after so many biopics and serious dramas like Lincoln and Bridge of Spies. After all that he's contributed to pop culture over the last forty-plus years, I couldn't think of anybody better to helm such a huge undertaking.

Ready Player One is like a modern gamer's retelling of Willy Wonka and the Chocolate Factory, but instead of chocolate rivers and colorful candies, spoiled brats, and playful songs sung by Oompa Loompas, we get intense interactive worlds, permissible copyrighted characters, and those safe classic songs that we've heard over and over again on local radio. I will say this though; I never thought I'd ever be as reinvigorated by hearing Van Halen's Jump again as I did here. All of the action in the three challenges laid out is each different yet cool in their own ways, especially the second challenge that brilliantly reenacts a favorite horror film of mine. What I didn't like however, were all of the missed opportunities that Ready Player One flies past. The challenges should've been covered over two to maybe even three films instead of cramming them all into one, along with getting us invested into these characters. There's just not enough time to make it all work. Also, the love interest's real life person most certainly should not have been as attractive as she is. Just because she has a scar on her face doesn't mean that we can't see that she's above average. Lastly, the happy ending conveniently ties up all loose ends in place of having some real world tragedies that would've left a much bigger impact. Spielberg did the same damn thing before with Minority Report and War of the Worlds as well, like as if he (and possibly the studios) were too afraid to kill anybody off or have a darker conclusion. Overall though, I'm willing to overlook its many problems because the humor and eye candy alone are enough to make up for its problems. Worth mentioning are Mark Rylance (Dunkirk) as a game designer who's the stereotypical introvert, and Ben Mendelsohn (Rouge One) as the head of the big bad corporation. Rylance makes his role very believable and sympathetic, while the talented Mendelsohn seems to be falling more and more into the typecast of bad guy asshole. 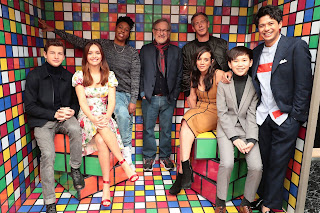 Ready Player One is worth the money to see it in theaters and also as an addition to your home movie collection. It's just a shame that it could have been so much more epic than it is. Expect to do a shit ton of pausing during home viewing as you try to point out the plethora of popular characters, props, and costumes. You may also have to pause it after you hear how hilarious the one free PG-13 F-bomb is used as well.

*take note that I've never read the original novel but am aware of the film's many changes, and yet I still don't care. This was a good time, and the changes made sense when looking at it from the perspective of the average moviegoer.

When the creator of a virtual reality world called the OASIS dies, he releases a video in which he challenges all OASIS users to find his Easter Egg, which will give the finder his fortune.